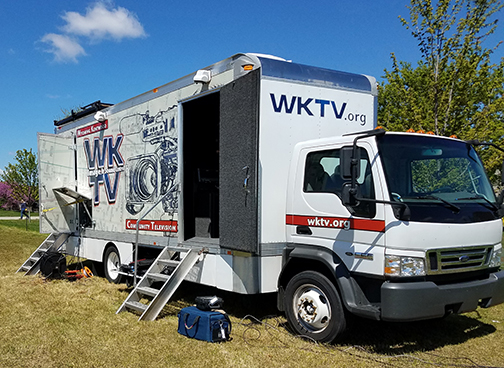 Here we are, beginning the traditional Michigan 100 days of summer, and one month removed from the tremendous Open House at the Friesian Connection. As advertised, crowds were huge and WKTV, Wyoming/Grand Rapids, was there with a mobile unit.

A great crowd of owners, breeders, riders, competitors, and spectators represented a record turnout this year. Janice said they ran out of ice cream, which was intended to feed 500. Four premier stallions performed, along with mares, colts, and fillies. What crowd pleasers! These camera-friendly animals surely enjoyed the attention. There were smartphones and cameras galore, not to mention the television recording equipment. WKTV brought their truck and five cameras—four were stationed around the outdoor arena and one provided roaming coverage. Char was on the console in the truck directing video capture and Bill alternated between three of the five cameras as the crew rotated.

Bill captured some of the action in the barns and pet corral, including interviews with owners, Friesian Horse Association of North America officers, and other horse lovers. He also caught up with a local ministry to disadvantaged children to get their impressions of the day. Horse lovers and spectators gushed over the friendly Friesians in the barns.

We are editing the video from the event at WKTV as part of our documentary on The Versatile Friesian. Please enjoy this clip from WKTV news on the Open House. https://youtu.be/YObxqnLAUvU

We will soon begin to post some of the event footage here at C Grace Productions.