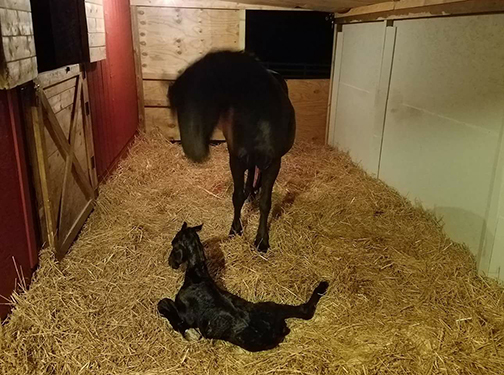 Recently, I had the privilege of witnessing the birth of a Friesian colt; this was my first foaling event. What an impact on me personally, on my wife, and on the mare owner. 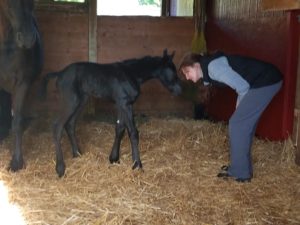 I grew up enjoying horses, not necessarily loving them. I guess I took our three Arabian/Mustangs for granted. I always enjoyed riding them and I knew enough to know when to stay out of Chica’s way. She was the one with an attitude. Dad bought Boots (½ Arabian-Mustang) was when he was sixteen and she was four. She bore Chica, sired by an Arabian. Chica bore Flicka, sired by another Arabian. Boots was getting old, but dependable when I was a tween. Flicka was always the bright, active one of the three in my memory. As I grow older, I miss those times. I loved feeding, grooming, and riding and would still enjoy it.

For now, I live vicariously through owners that I rub shoulders with. Like, Brenda, whose mare just foaled. She dearly loves her horses and was heartbroken when she sold a colt she had for over a year. I felt for her as she tried unsuccessfully to get her mare pregnant again. I rejoiced with her when she succeeded, and I rejoiced with her at the new colt’s arrival. Fortunately, we (Charlotte and I) were able to catch it on film. We arrived and set up my video camera late Tuesday night. It was a joy to wake up at 2:30 AM Wednesday at Brenda’s call, knowing the camera still had digital memory left and would have captured the whole event…I found the one hour and twenty-minute clip during which the mare foaled, and the colt finally stood on those long, unstable legs.

I stayed up, of course, trying to get the best personal view while leaving the camera running to catch anything that might be significant. When dawn came, a beautiful mist hovered over the paddock, yard, and nearby creek. The sandhill cranes, who had been waiting—yes, waiting—for the colt to arrive, let out full-throated squawks throughout the dawn and into the daylight as I filmed the sunrise over the barn and field behind it. It was in the low fifties and I only had a light jacket on. If I was cold, I didn’t notice it. What a wonderful day-night-day that was.